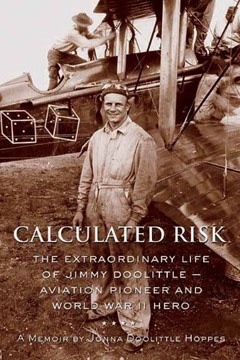 In 1942, Jimmy Doolittle led the Tokyo Raid ("Thirty Seconds Over Tokyo"); it was America's first strike against Japan and was credited with changing the course of World War II.

Although best known for the Raid, Doolittle's contributions to aviation had an even greater impact on history. He was a scientist with a doctorate in Aeronautical Engineering from MIT, an aviation pioneer, a barnstormer well known for aerobatics, a popular racing pilot, and a four-star general. The Air and Space Centennial Issue lists Doolittle as number one on the list of the top ten "most important aviators," and a section of the Smithsonian Air and Space Museum is dedicated to him.

Calculated Risk is a firsthand account written by his granddaughter that brings readers inside the public and private world of Jimmy Doolittle and his family and sheds light on the drives and motivation of one of America's greatest heroes. The book also features many never-before-seen photographs from the Doolittle Library archives.

As a child growing up in the Doolittle household, I was relatively unaware of the public personas of my grandfather Jimmy Doolittle and my grandmother Joe. To me, they were simply Granny and Gramps, and their home was Doolittle Central, a place of unconditional love and laughter.

As I matured, I learned about the public image of the general and the woman he called Duchess. I heard stories of the daredevil pilot who achieved numerous aviation firsts, of the scientist driven to expand the horizons of aviation and the general who asked only of his men what he himself was willing to give. I saw firsthand his insatiable thirst for knowledge and self-discipline, his sense of humor and his charm, his keen observations and his honesty and fairness.

He claimed that the luckiest thing that ever happened to him was when my grandmother agreed to marry him. I think that’s true. My grandmother had the patience of a saint. She stood by him throughout his life, usually beside him, but occasionally prodding from behind and sometimes in the lead. She was gentle, kind, intelligent, loving, and equally determined.

They lived through extraordinary times of great change. Early in his career, Jimmy Doolittle was branded a daredevil pilot who would try anything in an airplane-a reputation that was reinforced by his devil-may-care attitude when dealing with the press. But in truth, he was blessed with an analytical mind and most of his “stunts” were the result of careful study and planning. He was the master of the calculated risk.

There were those who claim that the Tokyo Raid was a suicide mission. This is not true. Although it was dangerous, the planning and execution of the Raid were based on calculation and study. Every man on that mission had reason to believe that he had a good chance of returning home safely. The Tokyo Raid was a calculated risk.

In her own way, my grandmother was also a master of the calculated risk. An “A” student with an equally analytical mind, she gambled early on a boy who boxed for spending money and fancied finding gold on the beaches of Alaska. She traipsed around the country, pulling up stakes and replanting them every time Jimmy’s career led them in a new direction. Never once did she stand in his way.

I would never claim that my grandfather’s success was because of my grandmother, but I believe she made success easier for him-that his achievements were also her achievements. She was the good woman behind the good man.

He was best known for leading the Tokyo Raid, but the raid was not what he felt was his most important achievement. He firmly believed that his experiments, especially in blind flight, were his greatest contributions.

Although many of the books written about my grandfather mention my grandmother, this is the first book that tells her story, too. This is their story, the story of their partnership. He was in the public eye. She was his rudder and the “wind beneath his wings.”

Calculated Risk is a biography, journal of historical events, memoir and love story. When Josephine Daniels met “that Doolittle kid,” he was a scrappy young fellow with little interest in high school. Together they created a future that would span more than seven decades. Decades that witnessed aviation records set, broken and reset. Decades that spanned two world wars. Decades that fostered the development of both military and commercial aviation. Decades that gave birth to the U. S. Air Force as an independent branch of the military services.

Calculated Risk is a window into the public and private lives of Jimmy and Joe Doolittle as world citizens, parents and grandparents.

I relied in part upon his autobiography, and books by Carroll V. Glines. I read my grandfather’s wartime letters to my grandmother, plus hundreds of letters sent to them over the years. But most of all, I drew from the stories my grandparents told us, my father’s recollections and my first-hand memory of the people I knew as Granny and Gramps.

As time moves on and takes with it those who lived history, our memory dims and their stories fade. Calculated Risk is my attempt to pass to a new generation the story of Jimmy and Joe Doolittle, and to keep our collective memory alive for at least a little longer.

grew up an Air Force brat and developed a passion for preserving military and aviation history. The granddaughter of General James H. “Jimmy” Doolittle, she has written two books: Calculated Risk, a biography/memoir about her grandparents and Just Doing My Job, a collection of 19 stories from World War II. Her lecture series keeps her busy touring the United States and Europe. Jonna works for the Department of Defense at Los Angeles Air Force Base. She has appeared on numerous television programs including the History Channel’s Man, Moment, Machine and a special documentary on Jake DeShazer. She lives in Newport Beach, California.

“This affectionate but not uncritical biography by one of Doolittle’s granddaughters usefully supplements existing material . . . Josephine Doolittle emerges as a heroic figure in her own right (a pioneer in what would now be called counseling PTSD veterans) and in every respect a worthy match for her husband, who seems to deserve all the praise he has received.”
—Publishers Weekly

“Hoppes’ memoir is perfect for any reader searching for a more personal account of Doolittle and the incredible support he received from his wife—whose hair was prematurely grayed by her husband’s love of risk.”
—ForeWord Magazine

“Along with offering new insight into the historic 1942 American bombing raid on Tokyo, there are two wonderful love stories woven into this exciting, beautifully written memoir of the late General James H. Doolittle:
One offers readers—with the kind of detail that only a family insider could hope to uncover—powerful, touching images of the near-lifetime love affair between a man and a woman—Jimmy Doolittle and his wife, Joe—a love that would help shape American history. The other love story, radiating from every page, is between a devoted granddaughter and her grandfather, at once a national hero and a loving, ordinary man.”
—Robert Lindsey, former Chief West Coast Correspondent for The New York Times and author of The Falcon and the Snowman

“Jonna Doolittle Hoppes has done a wonderful job detailing the story of her grandfather’s exploits as a visionary aviator. At the same time, she shows us the deep love and affection that Jimmy Doolittle and his wife, Joe, enjoyed throughout their long life together. Calculated Risk is a tribute to not only one of the greatest heroes in American history, but to a loving husband as well.”
—Helie Lee, author of Still Life with Rice and In the Absence of Sun

“Jimmy Doolittle set more high water marks than any individual ever in the history of aviation. I have had the honor of knowing the Doolittle family since WWII. Jonna Doolittle Hoppes has done an outstanding job of covering this great man’s life, as well as shedding light on the wonderful relationship Jimmy shared with his wife, Joe. Calculated Risk is a magnificent legacy to a true American hero.”
—Bob Hoover, legendary aviator

“Jonna Hoppes’ definitive biography of her grandfather is a life story and a love story, a journal of WWII , an intimate panorama of the history of aviation. Written from inside the family and inside the heart with meticulous research into weaponry, war actions and heroic deeds, the book also shines a spotlight on his oft-overlooked wife as it combines suspenseful plotting, sparkling dialogue, vivid portrayals of myriad characters, and lyrical descriptive passages.”
—The Literary Guild of Orange County