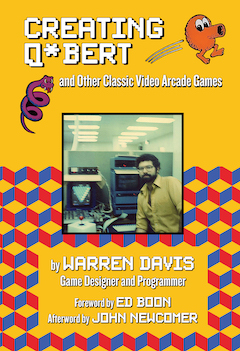 Creating Q*bert and Other Classic Video Games takes you inside the video arcade game industry during the pivotal decades of the 1980s and 1990s. Warren Davis, the creator of the groundbreaking Q*bert, worked as a member of the creative teams who developed some of the most popular video games of all time, including Joust 2, Mortal Kombat, NBA Jam, and Revolution X.

In a witty and entertaining narrative, Davis shares insightful stories that offer a behind-the-scenes look at what it was like to work as a designer and programmer at the most influential and dominant video arcade game manufacturers of the era, including Gottlieb, Williams/Bally/Midway, and Premiere.

Likewise, the talented artists, designers, creators, and programmers Davis has collaborated with over the years reads like a who’s who of video gaming history: Eugene Jarvis, Tim Skelly, Ed Boon, Jeff Lee, Dave Thiel, John Newcomer, George Petro, Jack Haeger, and Dennis Nordman, among many others.

The impact Davis has had on the video arcade game industry is deep and varied. At Williams, Davis created and maintained the revolutionary digitizing system that allowed actors and other photo-realistic imagery to be utilized in such games as Mortal Kombat, T2, and NBA Jam. When Davis worked on the fabled Us vs. Them, it was the first time a video game integrated a live action story with arcade-style graphics.

On the one-of-a-kind Exterminator, Davis developed a brand new video game hardware system, and created a unique joystick that sensed both omni-directional movement and rotation, a first at that time. For Revolution X, he created a display system that simulated a pseudo-3D environment on 2D hardware, as well as a tool for artists that facilitated the building of virtual worlds and the seamless integration of the artist’s work into game code.

Whether you’re looking for insights into the Golden Age of Arcades, would like to learn how Davis first discovered his design and programming skills as a teenager working with a 1960s computer called a Monrobot XI, or want to get the inside scoop on what it was like to film the Rock and Roll Hall of Fame band Aerosmith for Revolution X, Davis’s memoir provides a backstage tour of the arcade and video game industry during its most definitive and influential period.

His career in the videogame industry spans three decades. He began in 1982 working for Gottlieb where his first game was the hugely successful arcade classic, Q*bert. He followed that with a laserdisc game, Us Vs. Them. In the mid-80s, while working at Williams, he co-programmed Joust 2 and helped develop the system that became NARC. Davis was also part of the team that created Terminator 2: Judgment Day and Revolution X featuring Aerosmith. He also developed the digitizing system that Williams/Bally/Midway would use for many of their hit games of the 1990s including Mortal Kombat, NBA Jam, and the aforementioned Terminator 2 and Revolution X. In 2018, Davis was inducted into the International Video Game Hall of Fame.

“Warren was part of a small team building Williams’ next generation of video arcade hardware and software. By the time I joined the video game department, they had built a development foundation upon which future classic arcade games like NARC, Smash TV, Terminator 2, NBA Jam, and Mortal Kombat would be created. . . . I can’t overstate the impact Warren had on the development of Mortal Kombat and so many other Williams/Midway games.”

“Q*bert may be Warren’s most famous creation, but his work at 1990’s Midway was instrumental in the parade of arcade smash hits that marched out of our studio. He is both humble and accurate in his behind-the-scenes recollections. If ever you wanted a peek behind our coin-op curtain and a window into the life of a true industry pioneer, this is it!”

“Working alongside Warren at Williams Electronics was one of those rare, once-in-a-lifetime opportunities. He conjured magical code that introduced me to the world of digitization and video game programming. Not only a wise and entertaining designer/programmer, he impressed us all with his extra-curricular acting gigs. This book gave me a true appreciation for the man that was always positive, kind, and helpful to a young ‘know it all’ from Indiana.”

“The impact Warren Davis has had on video game culture cannot be understated. It was great to learn so much more about one of the Godfathers of the industry.”

“Warren delivers a ringside peek into the Golden Age of arcade gaming. Art, science, and commerce merged to produce games which continue to delight and challenge aficionados, and Warren was smack dab in the middle of it. He tells his story in a clear, concise voice, all the while retaining a touch of awe reflecting the alchemy of the era.”

“Warren was in the right place with the right stuff. We were fortunate to be at the beginning of a revolution in entertainment. It is great that an interactive entertainment pioneer has taken the time to write about his journey and Warren does it well.”

“Warren’s book is a well-written, entertaining history of the early video game industry. Working with Warren, Dave, Rich, and others creating Us vs. Them was an interesting creative challenge. We had never done anything like this before, but we just dove in, solving problems as they came up. I have a lot of great memories of our time together working on Us vs. Them, and Warren’s writing reminded me of a few I had forgotten. Thanks, Warren, for documenting the history of our great adventure.”

Conversations with Coach Wooden : On Baseball, Heroes, and Life
Scroll to top