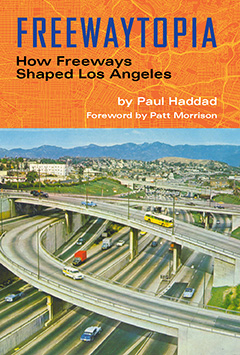 "Freewaytopia deftly connects dreams, politics, new suburbs, and white privilege to tell the stories of L.A.’s freeways. Hostile to communities of color when they were built and loathed today by gridlocked drivers, the freeways still reveal a rough grandeur in their overpasses and interchanges. When the road ahead is unexpectedly open, L.A.'s freeways can be poetic. Paul Haddad has caught their vital rhythm."—D. J. Waldie, author of Becoming Los Angeles: Myth, Memory, and a Sense of Place

"Open to almost any page and you'll find a saga, a drama, a nugget to amaze your friends."—Patt Morrison, journalist, best-selling author, and radio-television personality

Freewaytopia: How Freeways Shaped Los Angeles explores how social, economic, political, and cultural demands created the web of expressways whose very form—futuristic, majestic, and progressive—perfectly exemplifies the City of Angels.

From the Arroyo Seco, which began construction during the Great Depression, to the Simi Valley and Century Freeways, which were completed in 1993, author Paul Haddad provides an entertaining and engaging history of the 527 miles of road that comprise the Los Angeles freeway system.

Each of Los Angeles’s twelve freeways receives its own chapter, and these are supplemented by “Off-Ramps”—sidebars that dish out pithy factoids about Botts’ Dots, SigAlerts, and all matter of freeway lexicon, such as why Southern Californians are the only people in the country who place the word “the” in front of their interstates, as in “the 5,” or “the 101.”

Freewaytopia: How Freeways Shaped Los Angeles also explores those routes that never saw the light of day. Imagine superhighways burrowing through Laurel Canyon, tunneling under the Hollywood Sign, or spanning the waters of Santa Monica Bay. With a few more legislative strokes of the pen, you wouldn’t have to imagine them—they’d already exist.

Haddad notably gives voice to those individuals whose lives were inextricably connected—for better or worse—to the city’s freeways: The hundreds of thousands of mostly minority and low-income residents who protested against their displacement as a result of eminent domain. Women engineers who excelled in a man’s field. Elected officials who helped further freeways . . . or stop them dead in their tracks. And he pays tribute to the corps of civic and state highway employees whose collective vision, expertise, and dedication created not just the most famous freeway network in the world, but feats of engineering that, at their best, achieve architectural poetry.

Finally, let’s not forget the beauty queens—no freeway in Los Angeles ever opened without their royal presence.

His books include the Los Angeles Times Bestseller 10,000 Steps a Day in L.A.: 57 Walking Adventures and High Fives, Pennant Drives, and Fernandomania: A Fan’s History of the Los Angeles Dodgers’ Glory Years, 1977–1981  (named one of the Best Baseball Books of 2012 by the Daily News). As a Hollywood-born native, he has written about Los Angeles for the Los Angeles Times and hosted a column on Huffington Post about L.A.’s forgotten history. He has authored three award-winning novels, including the L.A. Noir Paradise Palms: Red Menace Mob. A graduate of USC’s School of Cinematic Arts, Haddad has been nominated for multiple Emmys as a documentary producer.

Patt Morrison is a journalist, author, and radio-television personality based in Los Angeles and Southern California. Morrison has a share of two Pulitzer Prizes as a longtime Los Angeles Times writer and columnist. As a public television and radio broadcaster, she has won six Emmys and a dozen Golden Mike awards.

“Freewaytopia deftly connects dreams, politics, new suburbs, and white privilege to tell the stories of L.A.’s freeways. Hostile to communities of color when they were built and loathed today by gridlocked drivers, the freeways still reveal a rough grandeur in their overpasses and interchanges. When the road ahead is unexpectedly open, L.A.’s freeways can be poetic. Paul Haddad has caught their vital rhythm.”

“Open to almost any page and you’ll find a saga, a drama, a nugget to amaze your friends.”

“The freeways of Los Angeles are so ubiquitous and functional that they’re easy to ignore. But every mile of elevated roadway was carved from lost landscapes worth knowing. And in his nimbly written, deeply researched, myth-busting book, Paul Haddad chronicles both the growth and what was taken away—most often from the Angelenos who had the least to lose—as the city reshaped itself in the service of cars, speed and sprawl. Recommended for transit policy wonks, local history lovers and anyone who has missed their lane in a complicated cloverleaf and wondered why they built it that way.”

“In his latest book, Freewaytopia: How Freeways Shaped Los Angeles, author Paul Haddad takes readers on a whirlwind tour through the history and lore of Los Angeles’ sprawling highway system.”

“Endlessly absorbing and a joy to read. Paul Haddad knows Los Angeles inside and out and his love of the area shines forth in this book.”

Forever Young : The Rock and Roll Photography of Chuck Boyd
Scroll to top