You are here: Home1 / blog2 / Reference & Social Sciences3 / How to Win Lotteries, Sweepstakes, and Contests in the 21st Century 2nd... 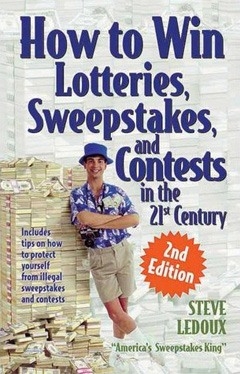 In this completely revised and updated second edition of his best-selling book How to Win Lotteries, Sweepstakes, and Contests in the 21st Century (over 75,000 copies sold!), Steve Ledoux—America's Sweepstakes King—reveals the secrets that have enabled him to win thousands and thousands of dollars in cash and prizes. He also shares his skills in choosing lottery numbers, entering and winning sweepstakes and contests, and spotting illegal scams in this savvy collection of prize-winning strategies.

Lottery and sweepstakes hopefuls learn how to find the right contests to enter, how to protect themselves from cheaters, and what to expect after winning, including how to deal with the IRS and give interviews to the media. Internet sweepstakes, contests, game shows, and resources complete this guide to winning the jackpot! Readers will learn:

Introduction
Millions of Dollars to Be Won

Chapter One
Lotteries, Sweepstakes, and Contests: An Overview

My desire to win began years ago with game shows. Before I even realized the opportunities that were available in the world of sweepstakes, contests, and lotteries, I’d already had great success as a game show contestant. Over the last several years I’ve racked up wins on shows including Wheel of Fortune, Match Game, Hot Streak, Blackout, Quicksilver, and Don’t Forget Your Toothbrush. (You may never have heard of a few of these games, but that’s good; I’ll tell you why later on.) I considered making a career out of being a contestant, but I soon learned that there are rules that restrict the number of game shows on which a person can be a contestant, but more about that later. My game show victories got me hooked on winning.

I then turned my attention toward the countless other sweepstakes and contests that are out there, ripe for the picking. And, as I soon discovered, there’s no limit to the number of such contests you can win. You’ll learn a little later in the book just how many opportunities are out there, and how to track them down.

But I got off to a rather shaky start. Without any guidance or knowledge about the world of sweepstakes and contests, I relied solely on luck. Don’t get me wrong, good fortune is a wonderful thing, but in terms of sweepstaking, it’s not the most important thing. After several years of misguided effort, I came away with a couple of tacky key chains and ugly T-shirts. I ended up so discouraged that I gave it up.

Still, that excitement of winning cash on the game shows lingered. And since I wasn’t allowed back on a game show for several more years, I took another run at sweepstakes. But this time I did my homework. Through trial and error, through experimentation and hard work, I came up with a plan. It’s the very same plan contained in this book. And then I put my plan into action.

My first windfall came while shopping at a well-known grocery store chain. As it happened, the store was promoting its 25th anniversary with a sweepstakes. Using a few of the tricks I’d learned, I entered the contest at each of the chain’s 12 stores. Guess what? I won a trip to Puerto Rico-the chain’s grand prize. I also won three color televisions from three individual stores. And I won a gift certificate worth $100. It was clear that my system was working pretty well. I was off and running.

A few weeks later, I rounded the corner of an aisle in another grocery store and almost knocked over a display for a Diet Coke giveaway. A cruise to the Caribbean sounded pretty good, so I entered. Three weeks later, I got the good news that my techniques had worked again. My dreams of winning had come true. Other trips quickly followed-San Francisco, Las Vegas, to name a couple-so many that I decided to stop entering such contests for the time being. Because of work, I just didn’t have the time to take all the trips I knew I could win! Nor did I want to pay the taxes on prizes that I would not be using.

To give you an example of how well my plans were working, I decided to enter a cooking contest. This is something akin to Attila the Hun becoming a teacher at a charm school. No matter. Despite my lack of cooking talent, I knew what the judges would want. And when I gave it to them-a recipe I called “Cracklin’ Double-Nut Fried Chicken”-I received a $300 first prize and a fancy certificate suitable for framing.

Now my friends, family, and coworkers ask me for advice on sweepstakes. “What did you win today?” has become a common refrain around the office. People think that I’m the luckiest person on Earth. But while luck may indeed have something to do with my success, you don’t really need it to win.

Winning isn’t the only positive result of my success. One of the most rewarding aspects of my hobby is being able to share my experiences and advice with others. In addition to this book, I have conducted several seminars in major cities across the United States. These seminars give me an opportunity to share my experiences with others, and more importantly, they offer the audience a chance to meet others who share their enthusiasm for winning.

I usually begin each seminar by asking the people in the audience their reasons for attending. I have found that the majority of the attendees are really only interested in strategies for winning large lotteries. What they don’t realize is that by limiting themselves to only lotteries, they are missing out on sweepstakes, contests, and game shows that offer much better odds than lotteries alone.

Why are most people interested only in the lottery? There are a few reasons. Lotteries are typically run by state governments, and people have faith that the process is fair and just. Also, most people have heard about illegitimate sweepstakes, scam contests, and slick phone solicitors that have taken innocent people for a lot of money. You’ll learn tips for spotting phony sweepstakes and contests a little later in the book. The final reason, perhaps, is that, in general, lotteries represent the crème de la crème of winnings. The sheer amount of money involved makes lotteries the ultimate fantasy.

One exercise that I always perform at the seminar is to have the attendees list three prizes that they would really like to win. I also ask them to write down three ways they would spend the money if they were to win a lottery. I have found that it helps to visualize yourself winning the prize. It may not necessarily increase your odds, but visualization allows you to have a more positive attitude throughout the entry process. Also, if you really visualize the prizes you want to win, you are more likely to focus on those contests that will help you reach your goals.

These seminars have allowed me to meet interesting people from different parts of the country, and their willingness to learn more and their desire to win inspires everyone around them, including me.

The author of How to Win Lotteries, Sweepstakes, and Contests in the 21st Century has won more than 500 sweepstakes and contests and has collected tens of thousands of dollars in winnings. He was been a winning contestant on Wheel of Fortune, has won all-expenses paid trips for two to the Caribbean, Hawaii, Jamaica, and Las Vegas, and has won a year’s supply of Ben & Jerry’s ice cream. His knack for winning has led him to be featured on over 100 television and radio shows, including interviews on the Howard Stern Show and The View. He lives in Studio City, California.

“How to win a lottery and get filthy rich!”
—CNN

“Who wants to be a millionaire? Well, who doesn’t? Our next guest is going to show you how to increase the odds.”
—Barbra Walters’ The View (ABC-TV)

“Steve Ledoux is ‘The King of Contests,’ ‘The Wizard of Winning,’ ‘The Lord of Lotteries’ . . . Steve’s winning ways open the floodgates to fortune.”
—National Enquirer TV

“How to win, win, win as many sweepstakes as you like”
—Women’s Day

“A helpful book for anyone who enjoys gaming.”
—Winning

“An excellent guide to winning strategies.”
—The Bookwatch

How to Speak Shakespeare
Scroll to top