The 2nd edition of Tiki Road Trip has been completely updated, expanded, and globalized. The best—and only—guide to Polynesian Pop culture, written by Tiki expert and urban archaeologist James Teitelbaum, now contains even more listings and reviews of Tiki bars and Polynesian restaurants, even more photographs, and even more drink recipes. The International listings have been expanded as well, and the Hawaiian glossary is much more comprehensive. All in all, the second edition ofTiki Road Trip is a superior refinement of what was already an indispensable book for followers of the ever-growing Tiki movement.

From Tiki godfathers Don the Beachcomber and Trader Vic to classic Exotica favorites Martin Denny and Les Baxter to contemporary Tiki artists Shag and Bosko, this resource covers everything Tiki in prose that is witty, entertaining, and essential for anyone who has ever stepped up to a bar, glanced up at the pufferfish hanging from the ceiling, and ordered a Singapore Sling.

In addition to the exhaustive listings, recipes for classic Tiki cocktails, a glossary of Tiki terms, and resources for buying Tiki goods and artifacts are also included. Reminiscences of famous points of interest that have closed are provided for the completist, for historical perspective, and for those seeking information on the current status of a favorite Tiki site which may have closed.

So slip on your grass skirt or Aloha shirt, because Tiki Road Trip is going to take you on a tour of the Tiki universe that will make waves from the shores of Rapa Nui to the beaches of Oahu!

Mai-Kai is not only Florida’s most spectacular destination for Tiki lovers, but is perhaps the last remaining establishment of its kind anywhere. No other Tiki restaurant can boast of the sheer size of Mai-Kai, the quality of the floor show, or the spectacular collection of Oceanic artifacts, many of which were actually collected in the Pacific islands. The list of places that can provide cocktails of similar caliber is a short one. Certainly there are few places as beloved by the Tiki community. Having celebrated its 50th anniversary in 2006, Mai-Kai seems ready and willing to remain Polynesian Pop’s flagship location for another half-century.
The Mai-Kai story began in the early 1950s, with Chicago brothers Robert and Jack Thornton. After leaving the armed forces, they traveled the country working as bartenders in all of the major Poly Pop hot spots of the era. They eventually selected Fort Lauderdale—then a sparsely populated blip on the road to Miami—as the location for their own house of Tiki. In 1956, the Thornton Brothers began construction of Mai-Kai at a cost of nearly one million dollars. With a mixology assist from Mariano Licudine (Donn Beach’s former right-hand man), the first version of Mai-Kai consisted of a small bar and four dining rooms that collectively held 225 people.
Four years later, Bob met the lovely Tahitian-born Mirielle, who had been recruited as a Mai-Kai Islanders Revue dancer. In 1961, she became part of what is now the longest running Polynesian show in the United States. Five years after meeting, romance blossomed between Bob and Mirielle, and after an 11-year courtship, they were married. Mirielle became Mai-Kai’s costume designer, choreographer, and talent scout. 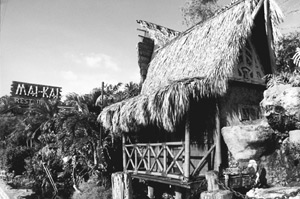 The business was expanded in the 1960s by the renowned team of architect George Nakashima and designer Florian Gabriel. The original designer could not be hired back, since he had vanished without a trace while flying a small plane over the Bermuda Triangle (really!). The revamped Mai-Kai seats 489 people in seven rooms (named Samoa, Lana’i, Tahiti, Tonga, Hawai’i, New Guinea, and Moorea) and another 150 in the vintage 1970s Molokai Bar.
The Thornton brothers have passed on, but Mirielle and her kids Kulani and David still run Mai-Kai. Other key staff members include general manager Kern Mattei (the son of the previous manager) and 16-year (as of this writing) Mai-Kai veteran Pia Dahlquist. The entire staff are like family, and include the suave maitre d’ Patrick, the charming Hazel in the gift shop, terrific dancers such as Amber and Glenda, the ultrasmooth emcee Sonny, and (ending a 25-year run in 2006) the musical stylings of the great Mua in the Molokai Bar.
The restaurant is a vintage-style supper club, with two shows per night. If you arrive early, you’ll wait in the Molokai Bar for the next seating. The bar is designed to look like the lower deck of a ship. Gas lamps, rope, nets, the bust of a mermaid—all the things you might expect to find on an old galleon. A sprinkler system provides a continual “rainstorm” cascading down the windows, partially obscuring the gardens that in turn block any view of the real world outside. If the decor is awesome, the girls tending bar are more so. All dressed in bikini tops and matching mini-mini-mini sarongs, these lovelies take your drink orders and deliver them to the master mixologists secretly concealed in a back room. There isn’t a bottle in sight. After a short wait, the potions are delivered to you, as if out of nowhere. 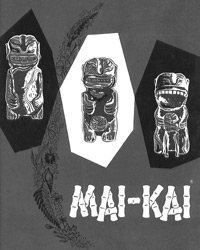 The drinks are categorically arranged as “mild,” “medium,” or “strong.” The S.O.S. and the similar Mai-Kai Swizzle are good; the S.O.S. has a hint of what might be mango and their house Falernum. Even better are favorites like the K.O. Cooler, Zombie, Jet Pilot, Shrunken Skull, Yeoman’s Grog, and Barrel O’ Rum. Also sampled by our expert team were the sour Shark Bite, Cobra Kiss, the strawberry yogurty Tahitian Paradise, a yellow-brown Mai Tai, the delightful Black Magic, and the similar Mutiny, which both have a coffee flavor (but are not coffee drinks, per se). Along with the Tiki Ti in Los Angeles, and any Trader Vic’s location, the Mai-Kai has a permanent place in a holy trio of old-school holdouts dedicated to the careful construction of their libations. Just imagine the freshly squeezed fruit juices, the quality liquors, the careful mixology, and yes, you can still keep the Tiki mug if you order the Mara Amu. Do I hear a hallelujah from the congregation? Show up at happy hour and your second drink is on the house. The gauntlet is thrown: let’s see Trader Vic’s top that!
The chow menu is exhaustive, and will likely cater to almost any taste. Thai and sushi have replaced Cantonese and Szechuan as the exotic food of choice for many Americans, and Mai-Kai has updated the menu to reflect this. There are also plenty of American and Polynesian selections. The food here is expensive and the broad selection of dishes on the menu does vary in quality. Not that you’ll really notice, because . . .
The Mai-Kai Islanders Revue is outstanding. A team of wonderful male and female dancers, costumed and choreographed by Mrs. Thornton and backed by a six-piece band, perform an array of traditional island dances. Sonny is as laid-back as can be, announcing the dances while the musicians alternate between favorite Hawaiian songs and thundering Polynesian drums. The nifo’afi (fire knife dance!) is exciting, the hulas are spellbinding, the slap dance is always entertaining (you’ll be attempting it yourself later that night after a few K.O. Coolers, guaranteed), and the Tahitian wedding dance is purdy. You will be billed $9.95 per person for the show, and you’ll want more when it is over.
After the show, stroll through the gardens. On the way, you will pass two large black velvet paintings by Leeteg. Outside, a series of paths wind through a tall, dense, and lush garden, filled with exotic trees, plants, flowers, fountains, streams, and bridges. The gardens also are festooned with Tikis of all shapes, sizes, and origins, from three-story-tall monsters that have survived 50 years of Florida sun (and several recent hurricanes), to vintage creations by the likes of Barney West, to modern works by noted carvers such as Dave “Basement Kahuna” Wolfe. The hundreds of Oceanic artifacts on display inside the Mai-Kai were collected during the Thornton brothers’ travels; familiar Oceanic Arts carvings fill in the gaps. And as it turns out, the castrated Tiki in the gardens was not an act of censorship, but an act of vandalism. You just don’t do that sort of thing to a Tiki. Memo to the vandal: please return the purloined member at once. 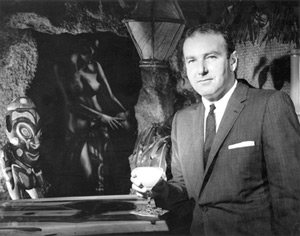 The gift shop looks like the interior of a Balinese temple. Added in the late 1960s, the decor was apparently scavenged from an unidentified movie set. There is quite a selection of stuff to be found within the shop. Look for a T-shirt with the drink menu on it, aloha shirts, Tiki Farm mugs, the occasional vintage calendar or other bit of ephemera, and costumes identical to those of the waitresses in the bar. Anyone who can pull off wearing this outfit is strongly encouraged to do so. One person who does wear it well is the Mystery Girl, but we’ll leave her as a mystery to be discovered on your next voyage to the Mai-Kai. A pilgrimage to this gem in Fort Lauderdale is a rite of passage required for admission into the Polynesian Pop cool kids club. Go there, now!

has been a leading figure in the Tiki revival since the early 1990s. He launched the venerable Tiki Bar Review Pages web site early in 1995, wrote the book Tiki Road Trip (Santa Monica Press, 2003), and has been the been involved in the production (to varying degrees) of Tiki events such as Exotica 2000, Exotica 2003, Tabu Tiki Nights (monthly in 2004 and 2005), and Hukilau 2005 and 2006. He lives in Chicago, where he works in the music industry, writes, and teaches.

“Whether you’re the weathered Tiki crawler or the bright-eyed Tiki novice, this guide book is a really great tool to help you find your ideal tropical oasis. Whether you’re in the heart of a major city or in middle of podunk nowhere, James Teitelbaum’s Tiki Road Trip: A Guide to Tiki Culture in North America is a must-own for anyone looking for an expertly-guided nostalgic taste of the past.”
—MouseInfo.com

“The end result is nothing short of fantastic: it’s virtually a treasure map for Tiki lovers. I’m sure as the result of this book, many of these long lost Tiki Bars will get renewed interest from Tiki travelers. I know from now on I’m checking this book whenever I head out of town.”
—Tikiroom.com

“Tiki Road Trip is a cover-to-cover delight, and I will never again be able to drive past a bar with an outrigger canoe without wanting to go inside. Wow. That means this is a book that changes lives.”
—RoadTrip America

“Whether you’re a Tikiphile looking to explore new locations or you’re just planning a unique road trip this summer, this book will help you map out a bangin’ itinerary.”
—Boston’s Weekly Dig

“A good manual for hipsters and other cultural sponges to take along on road trips . . . So lay down some swingin’ Les Baxter tunes, break out the DaGa mugs, brew up a pitcher of Planter’s Punch and roll out the maps. It’s time to trip.”
—Atomic Magazine

“Tiki Road Trip makes for an entertaining and definitive guide. It’s a good read even if you’re not going anywhere. But it’s better yet with, ahhh, a Mai Tai in hand (virgin, if you’re driving) and a thatched roof above your head.”
—Kim Roth, By the Way Magazine